Fossilnot wrote: ↑
Wed Aug 25, 2021 2:13 pm
I have fitted towbars to many of my cars since the 1960s and fully intend fitting an aftermarket one to the Enyaq (when they become available). I baulk at the price of the Skoda item though! It enters the territory where serious consideration might be given to a ‘tip car’-and would be if it were not for the price of fleet insurance or an additional stand alone policy.

The prime lesson from this experience, for me, is to thoroughly check the towing capacity/status/type approval before purchase of any future vehicle.

Not that I've had it done, but from experience of others over on the Kodiaq forum, you're looking at the thick end of a grand or so for an after market fixed towbar, which to my mind makes £750 for the electrically deployable factory fit option look like conspicuously good value. If you want an aftermarket electrically deployable one, or even just a removable towbar, it'll probably cost even more.

Even if you can find someone who will fit a fixed towbar for say £500-£600, you're not exactly saving a fortune and what you end up with won't be as well integrated into the car. There are the issues of having to code the rear parking sensors and electric tailgate opening for when a trailer is attached, which may get forgotten about at the cheaper end of the market. Not as simple as just a bit of welding these days, cars are more complicated!

Oh gosh! Really? I’ll post a breakdown of costs to SELF FIT an aftermarket towbar once I’ve done it! Did you really weld your towbars to your cars back in the day? Brave man…

Fossilnot wrote: ↑
Wed Aug 25, 2021 4:04 pm
Oh gosh! Really? I’ll post a breakdown of costs to SELF FIT an aftermarket towbar once I’ve done it! Did you really weld your towbars to your cars back in the day? Brave man…

Yep, I would imagine self-fit would be a good bit cheaper, but not the option most people wanting an after-market towbar will go for. I'm sure it's not that complicated, however the prospect of removing parts of the rear of my brand new car to fit it myself would not be something I'd contemplate - I'd break something in the process, skin my knuckles numerous times and end up spending just as much on the replacement bits I'd broken. And the chances of the rear parking sensors still working after I'd been at them - not worth contemplating!!

Sounds like you've got lots more experience and technical know-how than me.

The book of words does show a diagrammatic representation of a towbar for the Enyaq. The critical dimensions are there. It shows a thoroughly conventional set up with two side plates attached (by bolts!) to the back end of the longerons, and a transverse member. I’ll admit to a slight temptation to modify elements of the three towbars that I have stored in my garage but I think I can resist it…
Anyway, given that the design is perfectly normal, there is no reason for aftermarket towbars to be any more expensive than those intended for combustion engined vehicles.
My hatch is manually operated. (It would have been convenient to have an electrically operated one that I could control from the driving seat as my trailers are quite low down and I can’t see them with the hatch shut.)
Reversing sensors? I have found that I am able to live with a beeping noise for the short periods of time that I am reversing.
Other electrics? Those required by law only thanks and for that purpose I fit a smart relay so as not to confuse the car.
Yes there are sound aesthetic and originality advantages to fitting a Skoda towbar against which I weigh the disadvantage of having yet another electric motor (in an exposed position to boot), additional weight, and, in my opinion, high cost.
Presently the car feels very much like a long termer but should I fit a towbar as planned and at a later date chop the car in, the towbar would be removed prior to sale. Salesmen tend to have palpitations when they see a towbar…

I'd certainly would NOT advise anyone to try and manufacture or modify one as it will never be type approved as required by UK/EU law. Any type of insurance claim on the vehicle would instantly be void if they spot it.

Towbars are even part of the MOT's now and assessors can easily reject a "home made" or unsuitable one.

As for cheap bypass/smart relays for the trailer electrics, I'd be wary - yes they work but can sometimes flag up serious faults on these modern vehicles canbus network. And what about those vehicles with built in sequential/flowing rear indicators, that'll confuse the bypass relay !
Its always better to use a dedicated electrical wiring kit (OEM or Towbar Manufacture ) which integrates fully into the vehicles wiring system. The extra cost always out ways the troubles and inconvenience of cheaper installs.

And as its already been stated - The vehicle itself must be type approved for towing too by having the towing prep option added. This also makes it even simpler to integrate the towbar electrics with, its almost plug and play. But I believe it will still need coding to function correctly.

I too have been fitting towbars to many vehicles since late 70's, and its becoming an ever increasing battle now to install them with these laws and regulations. To which point now I don't bother, I just get them factory fitted. 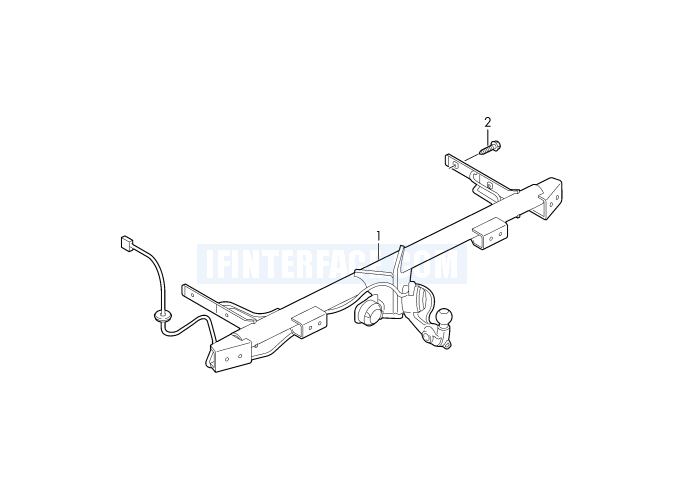 tiger tony wrote: ↑
Thu Aug 26, 2021 7:34 am
I too have been fitting towbars to many vehicles since late 70's, and its becoming an ever increasing battle now to install them with these laws and regulations. To which point now I don't bother, I just get them factory fitted.

And that was my original point entirely - £750 for the electrically deployable towbar on an Enyaq is pretty good value in the grand scheme of things for a towbar that's properly integrated and you know will mean that the car is definitely homologated for towing up to the weights previously mentioned.

I just posted this on another thread:

This is really unbelievable, but apparently we can't fit a standard bike rack to the back of the Enyaq IV we have just bought. It turns out we need a towbar. BUT, even more unbelievable, some Enyaq IV units come with the wiring to fit a towbar, and some don't. Ours (a showroom model) doesn't. AND, completely and totally unbelievable, two Skoda agents have said they can rewire the car and fit a towbar, but it will cost an eye-watering £1250! And that is before fitting an actual cycle rack.

We don't feel we were properly informed by the agents from whom we bought the car, but Skoda have rejected our request that they pay all or part of the cost of rewiring the car and fitting a towbar. This has left us feeling very upset and cross, and honestly, wishing we had bought a different car.

If anyone else has had a similar problem and found a solution, we would love to hear it (NB we can't manage to lift the bikes onto the roof).

And if you are wanting to carry bikes on the back of your car, our advice is to work this out carefully before you buy.
Top

Looks like Brink have started the ball rolling with a couple of detachable and one fixed style towbars for the Enyaq. Available in Europe now but no prices yet for the UK.
They also offer a full integrated wiring kit which will obviously have to be correctly coded by the dealer or a friendly VCDS owner.
Enyaq iV60, Loft, Race blue, 100kW charge, 20" Vega's, Towbar, Climate Plus, Convenience Plus, Transport Pack, Light Pack, Parking Pack, Assd Drive Pack, Chrome pack.
Top

I had a Witter towbar fitted to my Octavia Estate on delivery, and had problems with it slamming into speed bumps when the car was loaded. I made sure that I went for the retractable tow bar on the Enyaq I've ordered.
iV80 Lounge, Heat Pump, 125kW charging, Tow bar
Previous EVs: Leaf 40 (x2), Leaf 30, Leaf 24. EVing since 2014.
Top

orrery wrote: ↑
Thu Oct 07, 2021 8:05 am
I had a Witter towbar fitted to my Octavia Estate on delivery, and had problems with it slamming into speed bumps when the car was loaded. I made sure that I went for the retractable tow bar on the Enyaq I've ordered.

I have the retractable tow bar and it's great, although I haven't used it yet to tow. Can't see it when it's folded away and pops out nice and easily. Given the price of factory fitted tow bars on some cars I didn't think it was too expensive.
Top
Post Reply
23 posts